Welcome to All Fired Up Stoves

New technology, developed by Broseley, is leading to a dramatic rise in the number of householders turning to wood burning stoves as a practical way of cutting fuel bills whilst finding an environmentally-friendly way to heat their homes. Dennis Kerr, a leading installer of ‘green’ heating systems explains how our Safety Cold Water System (SCWS) is revolutionising the industry.


Until quite recently it was extremely difficult to connect a wood burning stove to an existing sealed heating system as there were a number of practical problems that had to be overcome, particularly in newer properties.

Most homes built in the past 30 years or so rely on a sealed central heating system. So the connection of a wood burning stove boiler that requires the installation of an open vented system including metal feed and expansion tank, open vent, cold feed and a gravity fed heat leak radiator can cause extra work and adaptation of an existing sealed heating system if the wood burner is being retrofitted.

This is particularly difficult when working in a modern property where space is at a premium. What’s more, such a system is difficult to design with lots of extra pipework. Typically, such a system would take a plumber or specialist installer around two days to fit, on top of the time needed to install the stove itself.

As a result, it is not surprising that we would only carry out around three or four such installations a year, and then normally in older properties with existing  open vented systems already fitted.

That’s all changed with the introduction of Broseley’s SCWS, which enables many of the firm’s boiler stoves to be fitted directly to a sealed system, often within just two hours rather than two days!

We are now carrying out at least one installation a week as more people realise the benefits of wood burners and, thanks to the SCWS, they are becoming much easier to install in newer properties. In fact wood burning stoves are no longer seen as a rural heating solution but are becoming an increasingly common sight in built-up areas and modern developments.

The self-build market has seen the fastest growth, especially as environmental issues dominate the headlines and more people aspire to an eco-friendly lifestyle.

The most popular solution is a bi-valent system, which enables a wood burner to work alongside another heat source, such as a conventional gas or oil boiler. This offers the householder the option to use the boiler to provide hot water when they do not have time to light a fire, or when the weather is warm and a fire would be overpowering.

This approach is even more efficient with the introduction of a thermal store that retains the heat of the fire long after it has gone out to provide hot water when it is needed. Furthermore, the SCWS also enables integration with solar panels and other renewable technologies.

One homeowner we worked with recently reduced her utility bills by around two-thirds after installing one of Broseley’s eVolution 8 stoves in her lovingly restored 17th Century farmhouse near Bristol.

Thanks to the SCWS she was able to connect the stove to a sytem that also included solar panels, a thermal store and a back-up oil boiler.

At the other end of the scale, we have also worked on an ultra modern new-build in Tring, Hertfordshire. This 340 sq m property also benefits from solar panels, thermal store and the eVolution 8 and has been designed to be as energy efficient as possible.

Before the development of the SCWS, using a wood burning stove as part of such ambitious projects would not have been practical or cost effective but now it is helping to make them a real alternative to convential boilers.

What’s more, I would urge all plumbers and heating installers to find out more about Broseley’s SCWS as it enables them to offer their customers a greater range of options when choosing their preferred heating system. 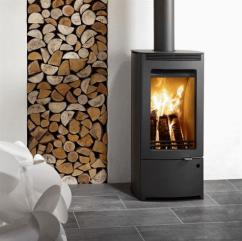 Want to Upgrade to a SIA Eco22

For a FREE Quote or Survey

"Excellent service. Could not be more helpful and thorough with advice and service of Woodburners. Highly recommend"